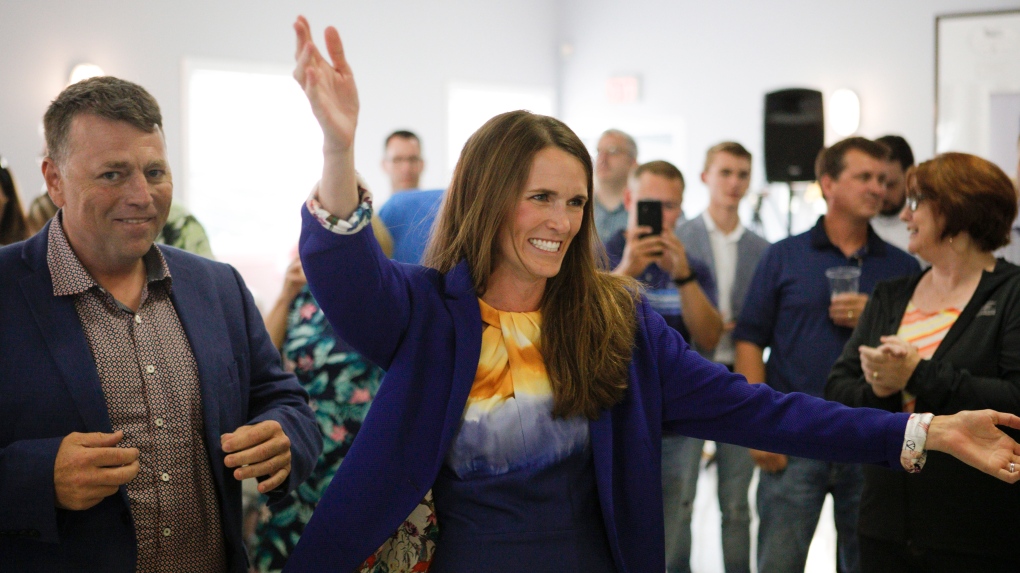 Conservative candidate Natalie Jameson throws her hands up in joy after winning the PEI byelection for Charlottetown-Hillsborough Park on Monday, July 15, 2019 as PEI Premier Dennis King looks on. Almost three months after the provincial election on Prince Edward Island, Jameson has won in the riding of Charlottetown-Hillsborough Park. The vote for the riding was not held during the April 23rd general election due to the death of Green candidate Josh Underhay in a boating mishap just days before the election. (THE CANADIAN PRESS/John Morris)

The vote for the riding was not held during the April 23rd general election due to the death of Green candidate Josh Underhay in an accident just days before the election. Underhay and his son died in a boating mishap on the Hillsborough River on April 19.

Jameson ran on a theme "It's about people."

"People have lost faith -- they are no longer convinced that the decisions being made on their behalf are for the greater public good and they feel they're not being heard. I want to change that," she said in a statement.

There were four candidates in Monday's vote -- Jameson for the Tories, John Andrew for the Green party, Gordon Gay for the New Democrats and Liberal Karen Lavers.

The Progressive Conservatives led by Dennis King won a minority government in April -- the first minority outcome on P.E.I. since 1890.

Don Desserud, a political scientist at the University of Prince Edward Island, said winning Monday's deferred vote was a big victory for the Tories and puts them just one seat away from having a majority.

"This is a pretty good indication that the PC party has some solid support, and having an MLA now from Charlottetown is going to be a real vote of confidence for them," Desserud said in an interview Monday night.

Desserud said he wasn't surprised to see the win go to the governing party.

"When it's early like this, we know who is governing, so the incentive is why not have somebody on the government side," he said. "Not taking away from Natalie Jameson's accomplishment here, that certainly would be a factor into a PC victory here."

About 34 per cent of the 4,080 eligible voters in Charlottetown-Hillsborough Park cast their ballots in advance polls, while the total voter turnout was 60.4 per cent.

Desserud said it was the quietest election he'd ever witnessed, and believes it was because of the minority situation in the legislature.

"It was like people were walking on eggshells, afraid of making a mistake," he said.

"The campaign was during the spring session of the legislature. It was like no one wanted to say anything that might upset the deferred election, and it was like no one in the election wanted to upset what was going on in the house."

Declaration Day will be Wednesday, July 31 when the candidate is named the official winner of the deferred election.