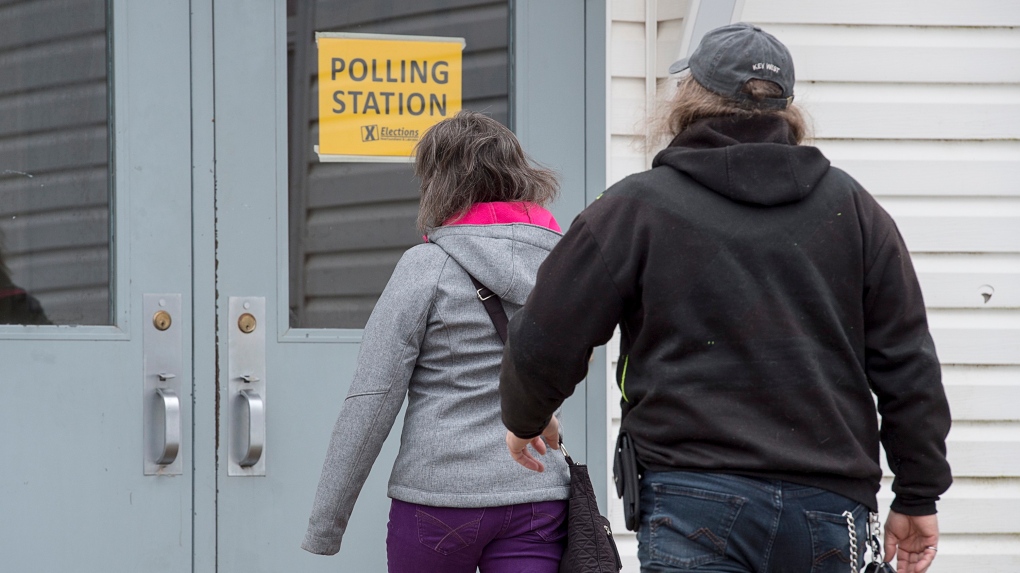 Residents arrive to vote in the provincial election at Immaculate Conception Roman Catholic Church in Deer Lake, Newfoundland and Labrador on Thursday, May 16, 2019. (THE CANADIAN PRESS/Andrew Vaughan)

ST. JOHN'S, N.L. -- Newfoundland and Labrador woke up after an election without a majority government for the first time in nearly 50 years Friday morning, but there were early indications the incumbent Liberals won't immediately face an existential threat.

The Liberals were one seat shy of the 21 needed for a majority.

Tory Leader Ches Crosbie suggested Thursday he planned to try to topple the government, but on Friday politicians outside the red and blue camps told The Canadian Press they would rather avoid another imminent election.

In an interview, NDP Leader Alison Coffin said another election within the next year would be "destructive" and unnecessarily slow the province's economy.

"At this point I don't think that we need to rush for any more upheaval. I think we need to do a fair bit of work," she said. "Maybe the election will happen sooner but not necessarily in a year."

At least one of the Independents also expressed his willingness to work with the government.

In his victory speech in Corner Brook late Thursday, Ball spoke about the need for collaboration in the legislature while criticizing Crosbie afterwards for running "a very dirty campaign."

Across the island in his St. John's district, Crosbie said he would not concede, and predicted Ball's government would not survive the year.

Crosbie described the results as "a situation of constitutional instability" and said he would be reaching out to Independent and NDP members in the coming days.

"They will have to struggle for the next months and years to hang on to power," he said of the Liberals.

Further details on the Tory leader's plans had been expected Friday, but a scheduled media appearance was postponed until next week.

With no incumbents in the race and candidates in just 14 ridings, the NDP rallied to claim three seats, including one for political rookie Coffin.

Coffin congratulated Ball on his "fine" campaign in her Thursday night speech, though she said to applause that the premier had met a "formidable adversary" in her.

Coffin said Friday she is open to working together with the Liberals in areas of common ground.

"If (a) minority government really is interested in true debate and actually solving the problems that exist instead of putting band-aids over them, and they're willing to talk, then I think we have the real potential for getting a lot of work done here," she said.

Coffin said she had not spoken with Crosbie or Ball as of midday Friday and she expected real discussions would begin next week.

The results are the latest in a string of minority governments to be elected in Atlantic Canada over the last year.

Voter turnout was up slightly, with 214,798 ballots cast compared to 200,834 in 2015. Opinion surveys leading up to election night suggested a lack of enthusiasm for any leader and a dissatisfaction with the status quo.

Coffin said she had been skeptical of speculation that the NDP would be shut out of the house of assembly, but she said the five-vote victory for Jordan Brown in Labrador, still pending a recount, was a "pleasant surprise."

With that one riding making the difference between a Liberal minority and majority, Coffin said she is looking forward to future debates in the legislature in the "new era" of politics for the province.

"Having the balance of power, that really puts New Democrats in a very, very good position and I think that will force us into collaboration a little bit more," she said. "I look forward to discussing that and seeing what comes of it."

In the aftermath of Thursday's results, speculation has also focused on the two elected Independents, Eddie Joyce and Paul Lane, both former Liberals.

Lane, who also previously sat as a Tory, said in an interview Friday that he was asked to join all the province's political parties before the election and his answer is still a firm no.

He said he's willing to work with the Liberals but plans to remain unaffiliated so he can hold the government to account.

Lane said he was disappointed in Crosbie's call to topple the government, saying another election goes against the needs and wishes of the people who are seeking solutions to more serious problems.

"I'm willing to collaborate, I don't want to bring down the government ... the people of Newfoundland and Labrador, they don't want another election. They want us to actually act like intelligent adults, roll up our sleeves and work together," Lane said.

"This partisan foolishness has got to stop."

Lane said he's not interested in Speaker of the House job because it would give the Liberals a majority, and he can't hold government accountable the Speaker's chair.