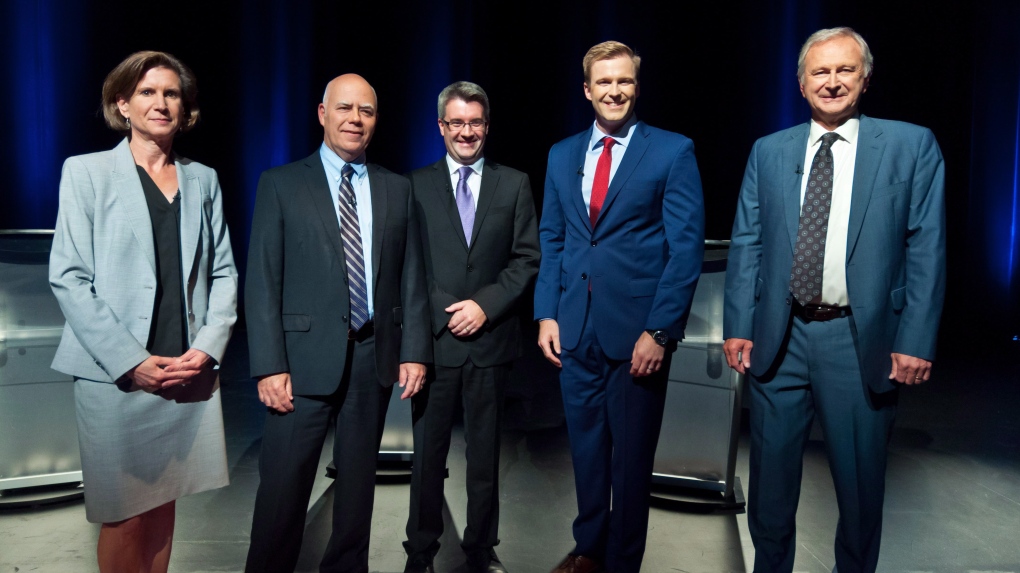 One prominent economist calls it "the elephant in the room" of the New Brunswick election: The coming fiscal reckoning.

New Brunswick is what some might call a poor cousin of Confederation -- it has the nation's lowest median household income, and was the only province that recorded a population decline between 2011 and 2016.

It is blessed with spectacular scenery and natural resources, but its tax base is shrinking and the province has suffered through consecutive deficit budgets and staggering debt.

With a week left in the province's election campaign, political leaders have promised a spate of measures they say will muscle the economy into shape and protect social services.

Yet economists say the province is headed toward a fiscal cliff, and a sharp rise in interest rates or a downgrade in bond ratings could push New Brunswick over the edge if action isn't taken soon.

"It's the elephant in the room and no one wants to look at it," says economist Richard Saillant, author of "Over the Cliff?: Acting Now to Avoid New Brunswick's Bankruptcy."

"The government is putting its head in the sand by not adjusting New Brunswick's spending to its demographic reality."

It started in 2008 when the province tried to prod a slowing economy with stimulus spending and public works projects, favouring shovels in the ground over balancing the books.

But the financial recovery has been feeble, hamstrung in part by demographics.

Nearly 5,000 people left New Brunswick's labour force in 2017, the Conference Board of Canada said in a recent report. While it's expected to grow by about 2,000 people this year, it's not enough to make up for the losses.

The shrinking tax base, coupled with weak economic performance, doesn't bode well for revenue growth in the province, Saillant says.

"The fiscal situation is deteriorating fast and that's concerning because basically we are the oldest and one of the fastest aging provinces in all of Canada," he says.

Economic growth -- forecasted by the Conference Board to be about 1.3 per cent this year -- will remain muted as the province struggles to increase its population.

"It's really not growing at a rate that we consider healthy," says Herb Emery, a professor at the University of New Brunswick in Fredericton.

"You have a stalled economy is one way to think of it. Or in a charitable way, it's in a steady state."

Meanwhile, the share of the workforce employed by the public sector is steadily creeping up in New Brunswick, as the private sector improves productivity and sheds labour.

"Since 2008 the number of people employed that don't rely on government payment has been in steady decline," Emery says, noting that there's a "gendered dimension" to the transition, with 85 per cent of males depending on the private sector for a job compared to 50 per cent of females.

But one public policy expert argues that despite New Brunswick's under performance, it's far from a fiscal catastrophe.

"I'm not concerned there is a fiscal crisis," says Christine Saulnier, director of the Canadian Centre for Policy Alternatives in Nova Scotia.

"The economy could be performing better -- not through payroll rebates or attracting the next big multinational but supporting community economic development from the bottom up."

While other economists expressed concern with New Brunswick's 10 consecutive deficits -- which this year became a small surplus -- Saulnier argues it's not a structural shortfall and says she's more concerned with addressing issues like poverty and job security.

But Emery says while waiting for old growth rates to return, the province continues to borrow to fill the gap.

"The big fear is that if borrowing costs rise, either from interest rates or downgraded bond ratings, we could hit a limit where we're not able to borrow or the people we're borrowing from want their money back in a shorter time horizon," he says.

It's not an unprecedented scenario. New Brunswick experienced a financial crisis after the Second World War, culminating in 1951 when creditors pulled the plug on the province.

New Brunswick could only continue to borrow after agreeing to have all policy decisions vetted in advance by the lender's adviser.

All five political parties in New Brunswick contacted for this story say the economy is a priority, with the Progressive Conservative party offering leader Blaine Higgs for an interview.

"I'm here because of the urgency we have in the province," he says, pledging that his party would support business growth and jobs and have a balanced budget in two years. "We can fix this, we have to be straight with each other and talk about real issues, not pretend all is well."

The incumbent Liberals say growing a fairer economy is their focus, promising to raise the minimum wage to $14, freeze power rates for four years and impose pay equity on large businesses. On Friday, they touted their party's plan to retain young people and draw expatriates back to the province.

The Green party is calling for a new approach to economic development with a focus on renewable energy and the sustainable use of ecological resources.

The New Democrats say investing in people -- including increasing the minimum wage -- will improve the economy, while the People's Alliance says it would reduce the tax burden on small- to medium-sized businesses.

Saillant says neighbouring provincial Liberal governments have managed to stop growing the debt on a per capita basis, with Quebec curbing debt by about $1,000 a person in the span of three years and Nova Scotia about $300.

In contrast, New Brunswick's has grown about $1,000 per person.

"It's not an ideologically driven approach as much as we just chose to put our heads in the sand and not show leadership on that file whereas Quebec and Nova Scotia did," Saillant says.

The issue, he says, is if New Brunswick finds itself needing a bailout from the federal government, Canadians will want to see that the province has taken steps to address its fiscal situation.

"We need to show we're taking leadership on that file," Saillant says. It's not an austerity-driven, neo-liberal agenda ... you need to show you helped yourself first before going hat in hand asking for more."

Emery, meanwhile, suggests one of the worst scenarios in a small, open economy like New Brunswick is that people will leave.

"Worse in New Brunswick means you get smaller .... If you really screw it up, people leave," Emery says.

"If you mess it up and you drive out the productive part of your workforce -- the new entrants and the prime wage earners and the new entrepreneurial class -- then you're left with a service sector industry supporting people with higher needs."