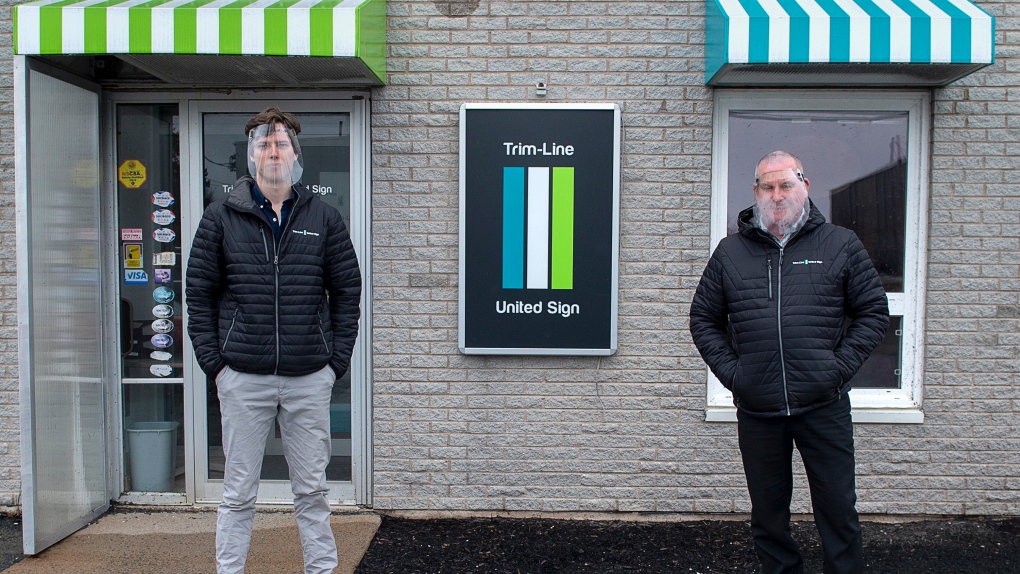 HALIFAX -- A small Halifax area sign company faced a bit of a problem when it realized it could retool to help provide thousands of face shields for health workers battling COVID-19 -- a scarcity of material.

The owner of Dartmouth-based United Sign, which has 18 employees, said many larger suppliers were either closed or completely out of the materials needed to make the protective equipment.

Matt Symes said his company managed to get enough polycarbonate sheets to make the shields by scouring across North America, but they were finding it hard to get the 24 kilometres of elastic needed to make the straps for 60,000 units.

Symes said the company's designer, Jonathan Kummer, made over 100 phone calls to small craft, sewing and quilting shops across rural Nova Scotia and was able to scrounge up enough elastic to make the first few thousand shields.

"It was the only place that we could figure out to get elastic band," Symes said in an interview Wednesday. "That allowed us to really get the prototype done and get the first 2,000 of them into shape where we could get them to market."

Kummer said he grew up in a rural community and figured that at least some small shops had elastic they could spare.

The hunch proved right, and Kummer said the response was immediate.

"Some had more, some had less -- but everyone was willing and a lot of them even went as far as to offer discounts just because of the cause," he said.

Kummer said the shop elastic helped to bridge the gap until a Halifax area supplier was able to find the majority of the supply through a "lot of leg work."

"In between the first of those shipments getting in, it was the smaller suppliers in Nova Scotia that allowed us to get going."

Symes said the company's first few attempts to design a prototype proved "laughable," and it was only when a contact sent them a link to an open-source design that things took off over a two-week period.

The new prototype was immediately sent to contacts in the New Brunswick government on April 3, he said, and three days later United Sign had approval for an order of 10,000 face shields.

Symes said he sees his company's contribution as a "stop-gap" measure, adding that it plans to produce shields for the Canadian and North American markets "when necessary."

"As soon as the Chinese market figures out the logistics of this we are not a long-term player in the shields," he said, adding his company has commitments so far for about 25,000 shields.

Symes said the COVID-19 crisis has illustrated that small companies will have to adapt their models once the economy is opened up and until their is a vaccine.

He said his company is preparing to make signage related to social and physical distancing that can be used in stores and offices.

"We are entering a period where small and micro-businesses are going to have to reinvent themselves, and part of that is going to be safety signage to make sure they can deliver their goods," said Symes.

In Nova Scotia, another company has also geared up to produce face shields.

MacKenzie Atlantic in Musquodoboit Harbour, has inked an agreement to provide shields for the IWK Health Centre in Halifax and the Nova Scotia Health Authority.

MacKenzie, which typically manufactures items for the defence sector, is looking to produce one million face shields for the health authority and 100,000 for the IWK.

The health authority said Tuesday that an initial delivery of shields is expected next week, with production expected to escalate to 70,000 shields per week.

Other larger Nova Scotia companies are also pitching in, with tire giant Michelin making hospital scrubs at its facility in Waterville and undergarment maker Stanfield's making medical gowns at its factory in Truro.