Two people are in custody after a shooting in the Fredericton area left two people injured and prompted police to issue an emergency alert in New Brunswick.

The Oromocto RCMP and Fredericton Police Force responded to a report of shots fired on Leafwood Crescent in the Hanwell Trailer Park in Hanwell, N.B., around 4:30 a.m. Friday.

Police say two people were taken to hospital with non-life-threatening injuries and one person was arrested at the scene.

The RCMP says other people believed to be involved in the shooting fled the scene in a vehicle.

Residents were told to either stay inside their homes, or evacuate the area, while police contained a nearby home on Elmdale Crescent, believing a suspect was inside.

An Emergency Response Team was also deployed to the scene and a tactical team surrounded the home until officers determined there was no one inside.

Police have since cleared the scene at the trailer park, but they said a small police presence would remain throughout the day.

Residents have since been allowed to return to their homes and say they were shaken by the day's events.

"It actually made us a little nervous this morning. We weren't too sure what was going on," said Matthew Howell, who lives on Elmdale Crescent. "I know the police have been here, this was the third time this week."

"We have three little kids and two of their bedrooms are right here in the front," he explained. "I'd rather have them somewhere else just so they don't have to see anything they don't want to see."

An emergency alert was issued around 10:45 a.m., in the Fredericton and Oromocto areas, advising the public that individuals “known to be armed and dangerous” had last been seen in the Oromocto area, and that they were driving a blue 2012 Honda Civic. 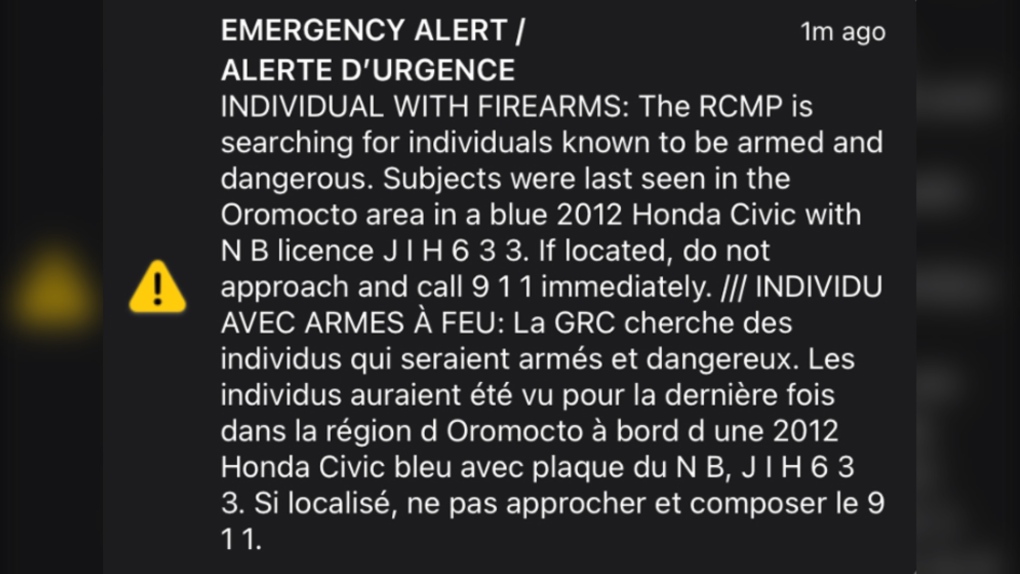 An emergency alert was issued in New Brunswick after a shooting outside Fredericton on Dec. 2, 2022.

The RCMP says police found the vehicle in the Longs Creek area, off Highway 2, around 12:15 pm.

A 22-year-old man was arrested at the scene.

The emergency alert was cancelled early Friday afternoon and police said people in the area could resume their daily activities.

However, the RCMP said police would remain in the Longs Creek and Hanwell areas as they continued to investigate.

"We want to thank the public for their cooperation during this incident," said RCMP Cpl. Ouellette in a news release.

"We especially appreciate their assistance in sharing our information as quickly as possible, and helping to keep 911 lines clear for emergencies and information related to the incident."

The federal government is pledging to increase health funding to Canada's provinces and territories by $196.1 billion over the next 10 years, in a long-awaited deal aimed at addressing Canada's crumbling health-care systems with $46.2 billion in new funding.

Balloons and drones among 768 Canadian UFO reports from 2022: researcher

Balloons and drones were among 768 reported UFO sightings in Canada last year, according to Winnipeg-based researcher Chris Rutkowski, who also found that eight per cent of all cases remained unexplained.

Three men who disappeared after planning to rap at a Detroit party were killed by multiple gunshots, police said Tuesday, five days after their bodies were found in a vacant, rat-infested building.

A report from British Columbia's coroner says a prominent anti-vaccine and COVID critic died in 2021 of a drug overdose, although he also tested positive for the illness post-mortem.