Youth arrested in connection with suspicious fire in Spryfield 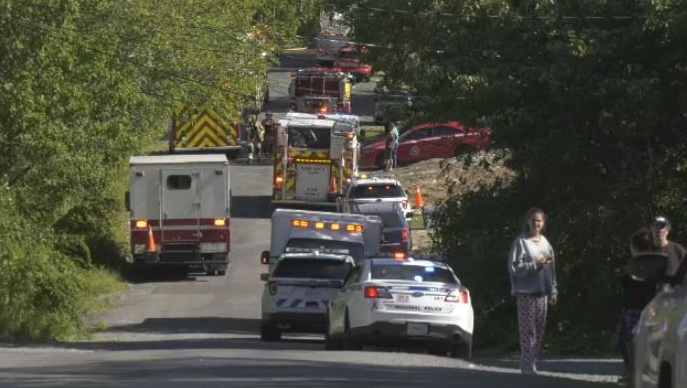 Emergency crews respond to a suspicious fire in the Spryfield area of Halifax on Sept. 9, 2019.

A youth has been arrested in connection with a suspicious fire at a home in the Spryfield area of Halifax.

Police and fire crews responded to the fire on McIntosh Street around 10:15 a.m. Monday.

Investigators say concerns were raised about possible incendiary devices on the property.

“While en route, our firefighters received some information from our dispatch centre that there may be some chemicals in the house as well,” said Halifax Regional Fire Deputy Chief David Meldrum.

There was a large response, with a number of police and fire vehicles on scene.

“Certainly, any time that unknown chemicals are involved, then we see police, we see EHS, and we see fire turn out in full,” said Meldrum.

“Given the nature of the call at first, we were calling in some extra fire resources here to do decontamination.”

People had already evacuated the home, and surrounding residences were also evacuated as a precaution.

Meldrum says the fire was mostly contained to the main floor, with some extension into the second floor, and was knocked down quickly.

He couldn’t say for sure what the chemicals were being used for, but says there is no danger to the public.

“Our tactical squad and Hazmat team have determined that the nature of the chemicals and the quantities are minor, and there is no danger to the public or to our firefighters,” he said.

A youth has been arrested in connection with the fire, which has been deemed suspicious.

Police say the investigation is ongoing. There is no word on possible charges at this time.