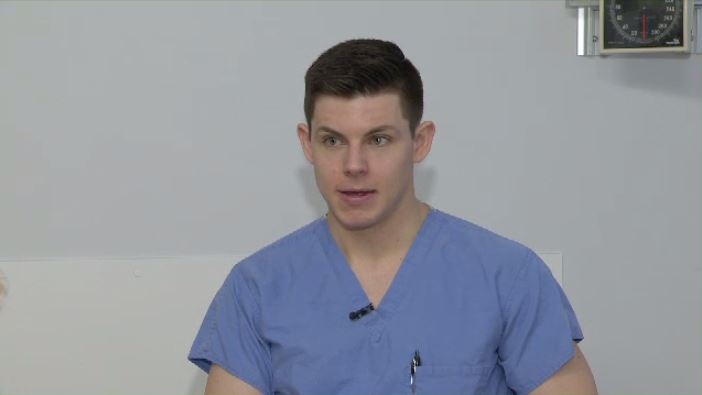 "When someone has burn injuries like Ebraheim, it takes a tremendous number of surgeries on the involved skin to reconstruct it," said Dr. Jack Rasmussen, the lead physician in the burn unit at the Halifax Infirmary. Dr. Rasmussen has been caring for Ebraheim Barho.

HALIFAX -- Here is the transcript of CTV Atlantic's Marie Adsett's interview with Dr. Jack Rasmussen, the lead physician in the burn unit at the Halifax Infirmary. Dr. Rasmussen has been caring for Ebraheim Barho since he was seriously injured a year ago in a Halifax house fire that killed his seven children.

Marie Adsett: He’s been through a lot this past year. Can you address what his care has been and how much he’s gone through?

Dr. Rasmussen: Ebraheim Barho has had to recover from severe injuries, as you can imagine. When someone’s skin is affected by flame burns as Ebraheim's was, it requires many surgeries and to reconstruct it all in this case. It was three stages to reconstruct his skin, so I think that involved nearly 15 surgeries to do this. For the first two weeks of his stay, he was on a long bypass machine … a machine to bypass his lung function entirely and undergo surgeries was a real challenge. It’s not been done much before and burn care is one of the biggest challenges. What we face with him was the severe weakness he developed as a result of his injuries. It’s not unusual to see that, particularly in severely ill patients in the ICU, but I think that will be one of his biggest challenges moving forward, gradually recovering his strength in getting back to a higher level of function closer to what he was before his injuries. He’s fortunate to have a supportive and incredible physical and occupational therapy team, so that involves things (such as) mobilizing all his joints to help them out, sitting him upright throughout the day to help him get strong again, adapting technologies to help him while he’s weak, utilizing a wheelchair other technology as well as speech pathologist to help get his voice back again and so he’s really had an incredible community support here in the hospital to help him recover from all the facets of his injuries."

Marie Adsett: Compared to other patients that you’ve covered, or your team has looked at, where does he rate? How severe was it?

Dr. Rasmussen: Ebraheim is unique in so far is that he first came in with 80 per cent plus burns. We’ve had patients with burn injuries as extensive as that before, but what was unique about this case was he developed such severe respiratory failure because of inhalation burns. Even with maximum support from the ventilators we couldn’t keep his oxygen levels up in a safe range, and so we utilized a technology called ECMO, which is often used for victims of influenza, for example to really take over his lung function entirely for the first two weeks of his stay. That’s something that has been described a limited amount of times in burn literature and certainly not been done here before and it’s never been done with a patient with his extent of burn injuries that I’m aware of. It was gratifying to see the team come together and it's something we’ve never done here before for a really unique and challenging case and survive an injury I don’t think he would’ve otherwise survived.

Marie Adsett: I think that’s what people are wondering: how did he survive?

Dr. Rasmussen: I think a multi-disciplinary team … he’s been looked after exceptionally well by the SIU team and plastic surgeons team, he obviously was a young healthy man before all of this, which works in his favour, and he’s had a tremendous amount of support from his family as well as the community that’s helped him get through all of this."

Marie Adsett: Can you just talk about his recovery this past year? How intense has it been? What physical thing does he have to go through in order to heal and return to this new life?

Dr. Rasmussen: When someone has burn injuries like Ebraheim, it takes a tremendous number of surgeries on the involved skin to reconstruct it. He’s gone through all of that and, at this point, can we reconstruct it back when someone has been as sick as he has, it’s not usual to feel weakness associated with that, and I think that’s our biggest challenge moving forward, is helping him through that how we can get back to a functional state."

Marie Adsett: How do you think this community can receive him and support him if he’s going to come on home?

Dr. Rasmussen: I think the sense I get from Ebraheim and his wife is that they really just want to get back to life as normal as possible. It won’t be the same as it was before his injuries, but I think they will continue to appreciate the support of their community the heart society and the community at large and I think, also, just to have some privacy as they transition back and adapt to what life looks like now versus before the fire.

Marie Adsett: We focused on the body, but what about the mind and soul? Just because of obviously the tremendous loss. How are you coping, or is he coping, with the grief part of this you talked about the mental health support.

Dr. Rasmussen: I can’t speak to what he’s gone through. None of us can except for his wife, but it has certainly been a process for him to help come to terms with losing his children. I think all along, the way he’s been fortunate to have the support of his wife his wife family and siblings are here as well as the support of the community. I think like anybody who loses family, it’s a process and will go on long after his left hospital."

Marie Adsett: Can we talk about the family? I’ve heard that his wife has been integral to his care, part of the team. If you can, talk about that for us?

Dr. Rasmussen: Ebraheim is remarkable. Ebraheim has gone through some challenging circumstances, but Kawthar has also gone through just as much herself. What’s incredible is we’ve really seen Kawthar become a full member of his care team, so she is involved in every step of his care at this point (and) supporting him in everything that will come moving forward as he as he gets ready to go back to the community. Ebraheim is at the point now where he is preparing to transition back into the community it will still take some rehabilitation and a lot of ongoing therapy as an outpatient, but we are getting closer each day of getting him out of the hospital which is exciting for Ebraheim  and his family.

Marie Adsett: What has he taught you?

Dr. Rasmussen: Certainly resiliency, of what people can get through with support. I’ve not seen anyone in my training … there’s really been no cases like Ibrahim described in literature, so to see someone with the severity of injuries come through this and still have such an optimistic attitude and be excited to get to go home and transition back to the community is really inspiring. It’s also been remarkable just to kind of see him progress and see his English come along while he’s been in hospital, so it’s been really a unique experience for myself for the burn team for everyone who has been involved in his care to see how far someone can come just from all the challenges he has faced.

Marie Adsett: Has he found his voice?

Dr. Rasmussen: Yes, very much so. It’s been really interesting to see him learn so much English … which has been rewarding for me personally. I think that’s one of the highlights from my perspective, seeing how far he has come and how interactive he’s become again.

Marie Adsett: What do you think he thinks about all of this attention and support and where he is now and where they have yet to go?

Dr. Rasmussen: Ebraheim and Kawthar, they are aware of how much interest and support the community has provided them. They are really touched with how they supported them thus far. I think that his focus now is trying to get home to his wife and trying to get to a semblance of normalcy again. He’s a young man. He was healthy before this, so he certainly is very driven to try to return back to his life as it was as much as possible. But, I think one of the key things is they want to thank everyone for how much support they were given the family during this whole process.