Kayla Hounsell in Africa: On the Air with Human Rights 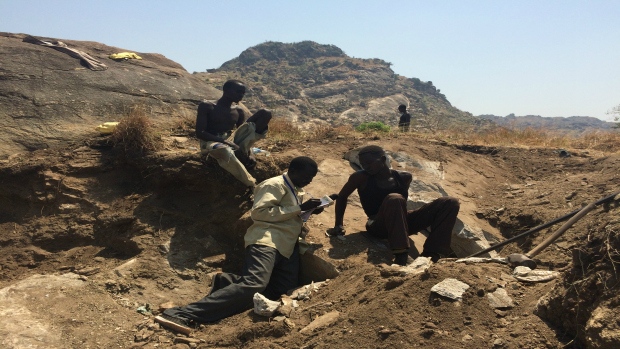 I might have once thought the challenges insurmountable. I might have said there is no way to produce television in this environment. But, as they say, “Where there’s a will, there’s a way,” and whatever we lacked in resources we doubled with will. Our first human rights story has aired on CTV in Juba!

Our story is about unsafe work conditions for “stone breakers” at Jebel Mountain. They chip stone out of the mountain, break it into pieces and sell it to be used as foundation and other construction materials. They work from sunrise to sunset, often without food and water. Sometimes they injure themselves and their colleagues. Sometimes the rock falls from above, killing those beneath.

Taban Dominic Daniel tells me he wants to find out why someone isn’t doing something about it and hold them accountable.

We spend three days trying to get an interview with the Minister of Labour. Finally, someone from her office calls and says, “Be here in 30 minutes.” Off we go! The minister answers our questions and promises to do something about the situation. She says the current work is illegal and believes the stone breakers must be organized into a union.

I’m excited to go to the mountain to get the real story, but there are other assignments and no one else to cover them - government announcements, press conferences, so many press conferences - our story must wait another day.

The next day we’re ready to go, but we have no driver. There is only one and he isn’t answering his phone. No one knows where he is. No news can be covered.

Eventually, we make our way to Jebel Mountain. The stone breakers are willing to speak with us, but armed soldiers are hovering, watching closely. They allow us to proceed, but warn us we should not travel further up the mountain. The reporter is disappointed. He says there are certain activities that we can only see from higher up. The soldiers don’t want us to have that view because their barracks are nearby and they don’t want people to know where they are. We don’t dare disobey them.

Another day passes and we are unable to work on the story because of other commitments. Understand that the driver drops us off at events and leaves to drive others. Sometimes we wait hours for him to return. Throw in the fact that events themselves can also be delayed hours, and there is much lost time.

We are now getting pressure from management to rush the story to air. They say it is taking too long. I explain that it is not complete and cannot go to air until it is. We still need the Workers’ Union. We don’t have their number and it’s not as if we can just Google it! We ask around. There is no number, but finally someone knows where the office is! The next day we go. The chairperson agrees to do an interview. Now we have what we need.

We take an entire day to write the story, working through lunch and battling every technical difficulty imaginable. The video editor is working on the story when it’s time for me to leave.

Five days after we begin working on it, Taban’s story airs.

There is sheer jubilation in the newsroom among the reporter, cameraman and video editor. One of them jokes that Taban is now the best reporter in all of South Sudan!

It is unlike any story they have ever done. First, it includes the voices of everyone affected (not just the government!) It holds those in a position of power accountable, includes both men and women, points out the laws and guidelines which are being broken, and illustrates the promises for change.

I ask Taban what he thinks of the finished product.

“I came to realize that it is a standard,” he says. “Whereby, if I keep this progress of work, then I know I will do something better in this world.”

He admits he has been watching the story again and again since it aired.  He wants to do more of this kind of reporting, but he is the station’s only full-time reporter. There is too much work for one person.

I tell him he needs to do a follow-up story in four months to check that the minister has done what she says she will do within that time frame. He first laughs, but when he realizes I’m serious, agrees.

“I have to do at least one story in a while,” he says, vowing to continue telling strong stories.

Even with incredible odds against him, there is still so much will.