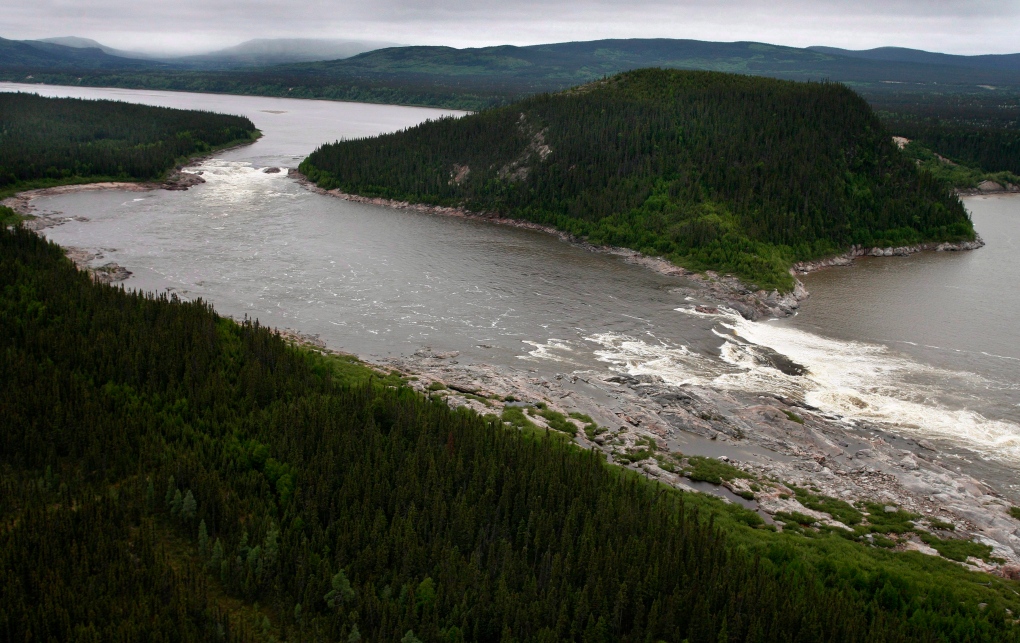 Muskrat Falls, on the Churchill River in Labrador, is shown in a Februrary 2011 file photo. (Paul Daly / THE CANADIAN PRESS)

ST. JOHN'S, N.L. -- Costs for the $7.7-billion Muskrat Falls hydro project are going up and the date for first power from the dam may be delayed, says the head of Newfoundland and Labrador's Crown energy corporation.

Nalcor Energy president and CEO Ed Martin on Tuesday blamed rising costs for labour and international supplies among other factors.

But he would not confirm a new price tag while major contracts for the dam and powerhouse in Labrador are still being negotiated. Nor would he offer a timeline for any update as the release of fiscal details could jeopardize commercially sensitive talks, he told a news conference.

"We understand how important transparency is. We understand it's paramount that the people have a right to know, and we are going to get that information in their hands as soon as I possibly can without jeopardizing their financial needs."

It was an explanation that raised incredulous objections from opposition leaders who said ratepayers are entitled to know what sort of bill they're footing.

"What's the magnitude of it?" Liberal Opposition Leader Dwight Ball asked outside the legislature. "This is not commercially sensitive information. We have a right to know."

Premier Tom Marshall said the province's hot economy has pushed up labour costs. Those pressures will continue but, over time, the project on the lower Churchill River is the cheapest energy option and will pay dividends, he said in the legislature.

"You can't stand on the wharf wanting your ship to come in when you didn't send a ship out. We're investing.

"There will be wealth for the people of the province that we have not seen in the past."

Martin also said the goal of providing first Muskrat Falls power sometime in 2017 is in question and may be delayed. Any decision will depend on whether pushing the construction schedule to meet that timeline would bloat overtime and other expenses, he said.

In Nova Scotia, Energy Minister Andrew Younger said news of the possible delay would have "zero impact" in his province in terms of cost or delivery of power. He said that's because under the project agreement, a delay requires Nalcor to deliver its promised allotment of energy by some other means or reimburse Nova Scotia Power for the cost.

Younger said the cost overruns relate to the dam project and have nothing to do with the construction of the subsea cables between Newfoundland and Cape Breton.

"The Maritime Link remains within the budget approved by the (Nova Scotia Utility and Review) board and it remains on schedule," said Younger.

Martin made his remarks during a news conference to release an interim report from the independent engineer overseeing Muskrat Falls for the federal government.

The 175-page report from MWH Canada makes several observations and recommendations as part of due diligence required for Ottawa's $5-billion loan guarantee of the development's financing. That federal backing has shaved about $1 billion off borrowing costs, Martin said.

The joint project with Nova Scotia utility company Emera (TSX:EMA) would bring power from Muskrat Falls to the island of Newfoundland and on to Nova Scotia. It involves a complex series of overland transmission and subsea cables.

The MWH report generally supports Nalcor's planning and progress so far, but notes some issues and gaps in the information it was given to assess.

For example, it finds fault with a project schedule prepared by Nalcor which it found "is not suitable to the level of detail we require and had expected to view to allow us to form opinions."

The engineer also questions the size of the contingency Nalcor has budgeted for unplanned costs. While most similar projects include buffer funds of six to 10 per cent, Nalcor chose an "aggressive" amount closer to six per cent, says the report.

Martin said he stands by that amount.

The MWH report assessed eight project areas including a visit to the site near Happy Valley-Goose Bay along with the construction design, schedule and capital budget. It's part of ongoing oversight that will continue through completion and how Muskrat Falls is operated over time.

Martin said 98 per cent of engineering work is done and a site that would accommodate a 28-storey building has been excavated. About 2,500 people are expected to be working on location by the end of this year.